This is my second attempt at making this fantastic challah.  Last year it came out good.  This year it came out exceptional. I used Smitten Kitchen’s Apple Honey Challah Recipe but, of course, changed it a bit! Here is a combo blog with her recipe and my improvements.  *warning* this recipe involves three risings (one of which is overnight)! so set aside the appropriate amount of time….I chose to make mine while staying home, trying to recuperate from a cold.
Step 1.  Harvest fresh apples from a friend’s orchard!
Step 2: Make Challah!
Ingredients
Dough:
1 packet active dry yeast
1/3 cup plus 1 tablespoon honey
1/3 cup olive oil, plus more for the bowl
3 large eggs plus 1 large yolk
1 1/2 teaspoons (8 grams) table salt
4 1/4 cups all-purpose  or bread flour, plus more for your work surface
2 medium apples, cored and cut into 1/2- to 3/4-inch chunks
Squeeze of lemon juice, to keep them from browning
1 large egg
Coarse sugar for sprinkling (optional)
*if you don’t want to let it rise overnight, let it rise at room temperature for about 45 minutes, then bake*
Apple filling:
1/2 tsp cinnamon
2 tbs (approx) of sugar
Egg wash:
Sesame seeds for sprinkling
Get Baking!
Whisk yeast and 1 teaspoon honey into 2/3 cup warm water and let stand until foamy, a few minutes.
In a large bowl, whisk together yeast mixture, oil, remaining honey (1/3 cup), eggs and yolk. Add flour all at once and stir with a wooden spoon until you get a craggy mass of uneven dough. Turn dough out onto a floured counter and knead it into a smooth, elastic dough, about 5 to 8 minutes. Try to use as little flour as necessary when kneading the dough; you don’t want to toughen the bread.
Transfer dough to large oil-coated bowl, cover with a moist towel and set aside for 1 hour, or until almost doubled in size. I preheated my oven to 175, then turned it off and put the dough inside there.  I let it rise for nearly two hours!
Make your apple mixture by mixing the chopped apples, cinnamon, sugar, and lemon juice in a small bowl.  Do this right before your first rise is almost done.
Turn dough out onto a floured counter and gently press it down into a flat, oblong shape (see first image below). Spread 2/3 of apple chunks over 1/2 of the flattened dough. Fold the other half over the apple chunks and press the dough down around them, flattening the now lumpy dough. Spread the remaining 1/3 apple chunks over half the folded dough. Fold the other half over the apples, pressing the dough down again. Your dough packet will likely be square-ish. Fold the corners under with the sides of your hands and form the dough into a round. Upend your empty bowl over and set it aside for another 30 minutes. 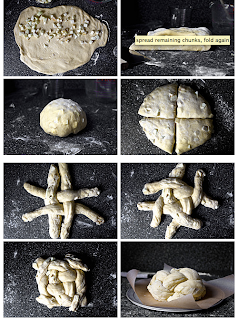 *this was taken from smittenkitchen.com
Once the dough/apple ball has risen, slice it into quarters and fold it, referring to the last 5 images above. Don’t worry if apple pieces fall out…just push them back in!  My “legs” were all different sizes, so uniformity is not that important.
Tuck the last dough pieces underneath when you are done braiding it. Whisk your egg and brush half of it onto the dough. 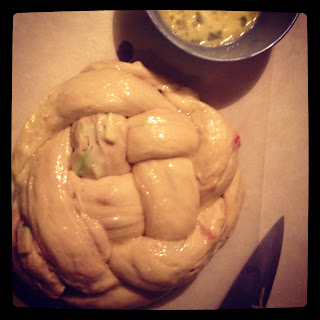 Next, place braided dough on a sheet of parchment paper. Place it on a plate and put an inverted bowl over the whole thing. Put it in the oven and let it rise overnight.
In the morning, remove from oven and let it come to room temperature for about half an hour.  Preheat oven to 375.  Using remaining egg was (I saved some that was leftover from first rub), brush that on top of dough.  Sprinkle with some sugar and sesame seeds.  Put dough (with parchment paper, trimmed) onto pre-heated cooking stone.
Bake for about 30 minutes until browned!! 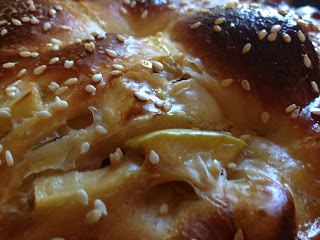 When done, let cool on a rack and enjoy!